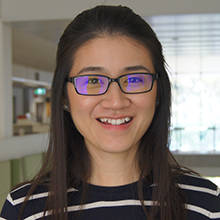 Dr Cher-Rin Chong is an NHMRC Peter Doherty Biomedical Early Career Fellow (#1162356) for 2019-2022. Her project is investigating a “Novel strategy to prevent cardiovascular complications in diabetes: the role of poly(ADP-ribose) polymerase-1 inhibition”. Hear Cher-Rin talk about her research in this video. A brief description of project: The diabetic heart is characterized by inflammation and low energy status, resulting in heart failure, impaired vessel function and blood clot formation.  Previous studies found that such processes involve the uncontrolled over-activation of an enzyme called PARP-1, usually responsible for repairing damaged DNA. This project will seek to better understand the extent to which PARP-1 is activated, and the impact of its inhibition on vascular, platelet and cardiac metabolism in diabetes.

Dr Cher-Rin Chong is a clinical pharmacist who completed her PhD under the supervision of Professor John Horowitz and Associate Professor Betty Sallustio at the BHI and The University of Adelaide. She then spent two years undertaking postdoctoral research at the University of Oxford, England 2015 on a prestigious Oxford Nuffield Medical Fellowship. In Oxford she worked with Professor Kieran Clarke and her research group in the Department of Physiology, Anatomy & Genetics.

Cher-Rin’s PhD research focussed on improving the efficiency of the heart in two ways:

Apart from her PhD thesis, Cher-Rin has also been involved in the research of Tako-tsubo cardiomyopathy (TTC). In particular, she is interested in antidepressants that may be associated with TTC and the impact of blood pressure changes during the acute stage of TTC. Additionally, Cher-Rin is also passionate about the further development of the pharmacy profession through education, experience and research. She wishes to be actively involved in the pharmacy profession in order to continue to improve patient outcomes. To help achieve this Cher-Rin is involved in a number of pharmacy-practice projects promoting the quality use of medicines.

Cher-Rin’s PhD thesis “A pharmacological approach towards myocardial protection: new perspectives in acute and chronic cardiac disease” was awarded in 2017.

2011 – 2015: The Australasian Society of Clinical and Experimental Pharmacologists and Toxicologists

Cher-Rin is a Committee Member of the Cardiology Committee of Speciality Pratice, Society of Hospital Pharmacists of Australia.

Cher-Rin and her supervisor Prof John Horowitz were interviewed for an article in “SpecialistUpdates – Cardiology” in August 2014.

You can also read about her research in a story by The Hospital Research Foundation.