German born and educated with research and work experience stints in New Zealand, Switzerland and Denmark, Katharina completed her PhD in 2017 at The University of Adelaide.

During her PhD research Kati worked on developing new ways to treat biofilms, a thin and usually resistant layer of bacteria that form on and coat various surfaces in the body. She aims to change the lives of those suffering from chronic rhinosinusitis. In July 2017 she was awarded a Dean’s Commendation for Doctoral Thesis excellence, for her PhD thesis titled “Towards novel antibiofilm strategies”.

To hear about her research watch Kati’s University of Adelaide’s 3MT presentation “Bug wars – battlefront biofilms” for which she received the People’s Choice Award.

Kati was recently awarded an NHMRC CJ Martin Biomedical Early Career Fellowship (#1163634) for 2019-2022. Her project is titled “Maximising the effectiveness of antimicrobial treatments for infection control after surgery”. A brief project description:

Superbugs, or antibiotic-resistant bacteria, cause recurring infections after surgery and non-healing wounds as existing antibiotics fail to effectively kill them. I developed and patented a novel approach to fight superbugs by feeding bacteria poisonous food. This could re-sensitise resistant bacteria and boost antibiotic activity as a double-whammy against superbugs. I will advance my treatment to clinical applications for effective infection control after surgery.

Chronic rhinosinusitis (a persistent inflammation of the sinuses) is highly prevalent in the community and one of the most frequently reported health conditions in Australia.

The disease is frequently associated with bacterial biofilms which are clusters of bacteria embedded in a protective layer. This renders the bacteria highly resistant to antibiotics (“superbugs”) and increases the risk of recurrent infections. Currently surgery is often the only remedy and new therapies are urgently needed.

With a pharmaceutical background and expertise in drug delivery and drug targeting Kati’s research focus is on innovative strategies to combat recurring bacterial infections (in particular of the ear/nose/throat). The ultimate goal of Kati’s PhD is to develop novel, more effective treatments to fight antibiotic-resistant superbugs and to control biofilm infections, thereby, aiming to improve medical therapies and patients’ lives.

Moreover, Kati is using state-of-the-art microscopy techniques to get insights into the micro and nano world of disease-causing bacteria.

In addition to her work at the BHI, Kati collaborates with Prof Clive Prestidge (School of Pharmacy and Medical Sciences, University of South Australia) on the development of smart-medicine approaches.

Kati is available as a supervisor to undergraduate and postgraduate students.

2011-2013: Community and emergency pharmacist in Germany and Switzerland

Through The Hospital Research Foundation (THRF) Kati has been:

In 2015 Kati was a Faculty of Health Sciences Finalist in the 3 Minute Thesis Competition. In 2016 she has been selected as one of two Faculty finalists to compete in the University of Adelaide wide final on Tuesday 13 September. And in 2017 she was the Winner of Fresh Science SA (Best early career researcher science communicator), a nation wide competition run by Science in Public.

She has previously assisted as a demonstrator with undergraduate pharmacy students at the University of South Australia.

Kati is the city-coordinator and team leader of the Pint of Science Festival in Adelaide, an annual festival which takes place around the world (60 cities in 12 countries) in May. The festival aims to bring current scientific research to a broad audience in the comfort and inclusive atmosphere of a pub! In 2016 all 3 nights were sold out in advance.

During 2015-2017 Kati has also volunteered at the BHI booth at Science Alive!, a 3-day hands-on science community event held in Adelaide each August that is attended by an estimated 25,000 people.

Kati’s research featured on the Channel 9 news and a story appeared in The Australian – Starving Bacteria to Kill Infections on Wednesday 2 December 2015.

In January 2016 an article about Kati’s research appeared in ENT Today (USA).

Kati is happy to speak to the media on the following topics: 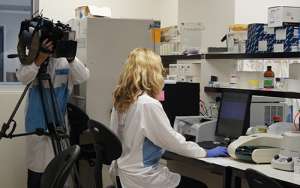