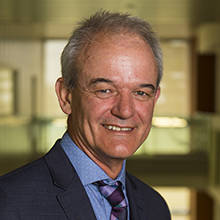 Professor PJ Wormald is Chairman of the Department of Otolaryngology Head & Neck Surgery and Professor of Skull Base Surgery at the University of Adelaide, South Australia. He is currently recognised as a leader in Sino-Nasal Disorders, FESS, and endoscopic Skull-Base Surgery. His medical practice and research interest are devoted to rhinology and skull base surgery. He has developed an animal model for eosinophilic sinusitis, to study various aspects of the disorder. Other research includes the role of the immune system and biofilms as etiologies of chronic rhinosinusitis. He is also involved in development of new clinical treatments and surgery for sino-nasal disorders.

Prof. Wormald is frequently an invited guest speaker to medical conferences on Sino-Nasal Disorders and Endoscopic Skull-Base Surgery. He is known to be an exceptional lecturer and teacher.  He has authored 6 books, 26 chapters, and over 320 peer-reviewed articles. In 2005, he authored a best-selling textbook on FESS – Endoscopic Sinus Surgery – Anatomy, 3-D Reconstruction, and Surgical Technique (translated to multiple languages and now in its 3rd Edition). He has particular teaching interests in the anatomy of the skull base and sinuses, frontal sinus surgery, and endoscopic skull-base surgery.

The ENT Surgery research team is interested in the pathogenesis of chronic rhinosinustis (CRS) and specifically on the role of bacteria and the microbiome on both the development of CRS and the recalcitrant course of some patients after surgery.  We have an interest in new topical treatments for CRS and in developing gels for the improvement of wound healing after surgery.  In skull base surgery we are researching different hemostats and have developed an animal model of major vascular injury in which we trial new treatments and also train surgeons.

Prof PJ Wormald is invoved in training surgeons from underdeveloped countries such as Myanmar.

He is available to talk to the media about Rhinology and skull base surgery.