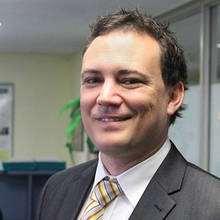 Scott is the Clinical Academic for the University of Adelaide Discipline of Psychiatry based in the Central Local Health Network and works as a consultant psychiatrist in the Western Community Mental Health Service.

He is the Chair of the metropolitan Adelaide Clozapine Working Group responsible for quality interventions in clozapine care systems. Scott completed a BSc in Psychology at Flinders University in 1994, followed by an Honours in Medical Science at the Centre for Neuroscience at Flinders University in 1995. He went on to study medicine in Adelaide completing his MBBS in 2004, and followed with a PhD in Health Informatics at Adelaide University during which he was supported by a NHMRC Dora Lush Postgraduate Scholarship. His PhD thesis focussed on the development of computer-based alerting systems designed to improve the quality of health care.

The identification of predictors of complicated course of mental illness will enable doctors to select the best evidence-based treatments early in the course of care, minimising symptoms and side effects and improving outcomes for patients.

Scott is available to co-supervise Honours or PhD students.

2017: RANZCP Early Career Psychiatrist Award. Scott’s Nature paper (Translational Psychiatry) published in September 2016 resulted in him receiving this award. The University of Adelaide, Medicine Today and Psychiatric News all published articles related to this publication. This Award was established by the Royal Australian and New Zealand College of Psychiatrists in 1979 to encourage and promote research in psychiatry in Australia and New Zealand. It is presented annually to the Fellow (within five years of their election to Fellowship of the College) or registrar who has contributed the most significant paper published in the past two years.

2015: International Congress on Schizophrenia Research Young Investigator Travel Award. This award enabled Scott to present his work on the use of probabilistic modelling to predict outcomes for patients in ultra high risk and early psychosis groups using multimodal data.

Positions held in the last 10 years

On Thursday 5th May 2016 Scott gave a presentation on Mental Illness to participants in U3A Flinders (University of the Third Age), a community group presentation arranged by The Hospital Research Foundation.

In 2014 he was a member of the Local Organising Committee (Scientific and Social Sub-Committees) for the Society of Mental Health Research (SMHR) Annual Conference that was held in Adelaide in December. At this Annual Conference he also ran an Early Career Workshop.

Dr Scott Clark is able to speak to the media about: