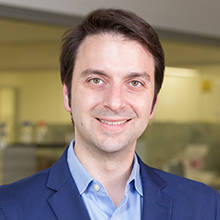 Professor Alkis Psaltis is Head of the Department of Otolaryngology Head and Neck Surgery at The Queen Elizabeth Hospital and and a Professor at The University of Adelaide. After completing his ENT training in Adelaide in 2011, Prof Psaltis completed three fellowships in advanced rhinology and Skull Base surgery in NZ and the USA. He most recently returned from Stanford University where also served as a clinical instructor.

Professor Psaltis has a strong research interest, having completed a PhD in 2008 researching the role of bacterial biofilms in Chronic Rhinosinusitis (CRS). His research has received international acclaim having been awarded numerous prizes. He has authored over 65 peer-reviewed articles, 5 book chapters and serves as an associate editor of the Journal of Otolaryngology and Annals of Otology, Rhinology and Laryngology. He is also a reviewer for 6 international ENT journals.

Alkis is currently supervising 5 PhD and 3 Masters student through the University of Adelaide.

Professor Psaltis’s research interests include evaluating causes of chronic rhinosinusitis particularly the role of bacterial biofilms and perturbation in the microbiome, lacrimal disorders and the development of topical therapies to combat chronic rhinosinusitis. He is currently the primary investigator on a world wide study investigating alteration in the microbiome in patients with sinusitis.

Professor Alkis Psaltis is available to speak with the media about: